Re-doing one of the "best infographics of 2014"

Someone at work shared this Fast Company post on the 18 best infographics of 2014. First up, the sleep schedules of 27 great minds: 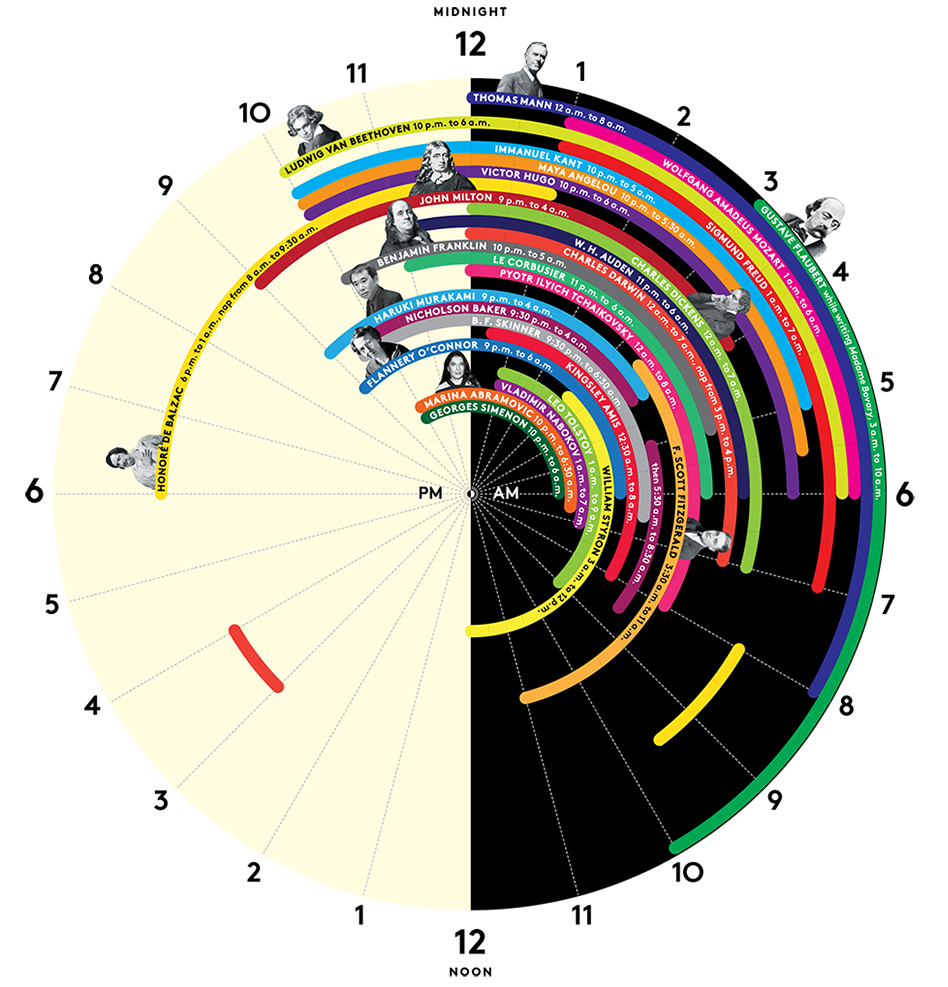 Except... I don't think it's that great. Granted, I'm heavily influenced by the blog, Junk Charts by Kaiser Fung, and am coming off a bit of a junk chart high after hosting him as a speaker where I work last month :)

Some issues I have with this "best" infographic:

Lastly, FastCo highlights the apparent point of the infographic:


The infographic seems to debunk the myth that geniuses stay up through the wee hours working manically, and that you're more creative when you're tired—most of these 27 luminaries got a wholesome eight hours a night.


That's not all that apparent to me when I look at the chart, primarily because you have to sort of parse out the actual sleep duration from the text (i.e. "10 p.m. - 6 a.m."), not from the arcs.

I decided to give a shot at a [granted, less pretty] re-do by entering the data into my own spreadsheet for plotting with R. At first I tried simple numerical values (sleep: 0, wake: 8 for 12-8am), but it got a bit tricky with respect to accounting for crossing midnight and shifting the axes how I wanted them. I resorted to actual date/time format. Not my favorite thing to muck around with in R, but it wasn't too bad. The data is here if you want to try yourself.

### I wanted to order the names by earliest bedtime
### the way I plotted the night/day rectangle also required a numeric
### value for each name, so I added that after ordering the names
data <- data[order(data$sleep_posix, decreasing = T), ]
data$name <- factor(data$name, levels = unique(data$name, fromLast = T))
data$id <- as.numeric(data$name)

With the data read in, here was my first plot attempt: 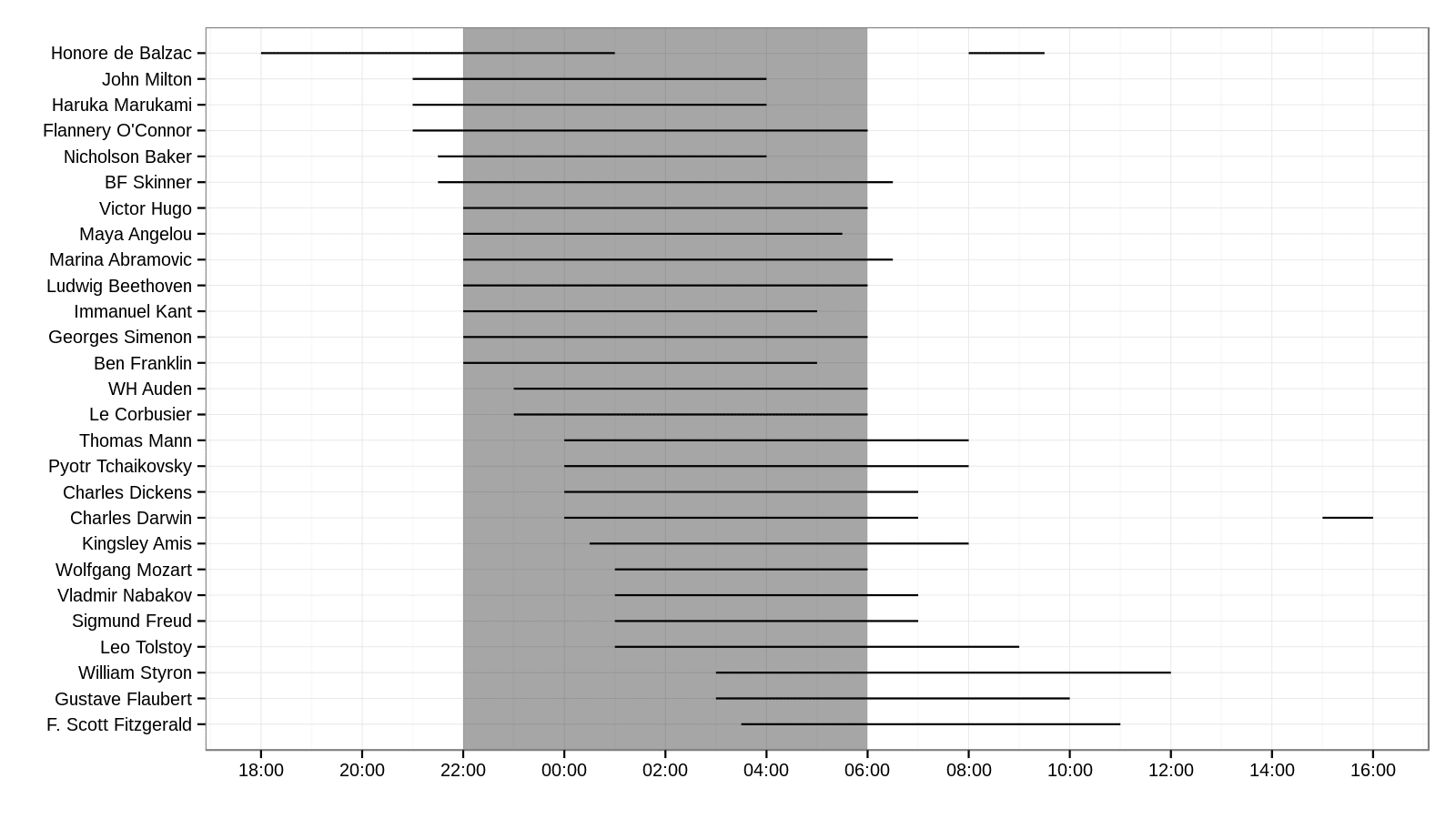 Again, not as pretty, but I find this easier to interpret. I chose an estimate for "normal sleeping hours" to shade darker (10pm - 6am) instead of AM vs. PM. This was my attempt at picking out "odd" sleep schedules from what one might consider conventional. It's easy to see that Balzac goes to bed extremely early compared to the rest, and that Styron, Flaubert, and Fitzgerald are shifted pretty far to the right. The two nappers are also easily identified. There's no need to add the actual times to each person, and the shaded region (once you know it's 10p - 6a) and the tick spacing also gives an additional reference point vs. necessarily having to always refer to the axes. In other words, Mann is a major tick after both the shaded start and end (12 - 8a).

Or perhaps if the goal is to illustrate that "geniuses" have reasonable bedtimes and sleep durations... who cares who they actually are individually. If this is the goal of the story, perhaps the names could be written in some body text and a simple scatter plot of bedtime vs. duration could be used?

### probably not elegant, but summarizing by name and g to capture the earlier
### bedtime and both durations, and then again by just the name to add the durations
data_sum <- ddply(data, .(name, g), summarize,
bedtime = sleep_posix,
duration = wake_posix - sleep_posix) 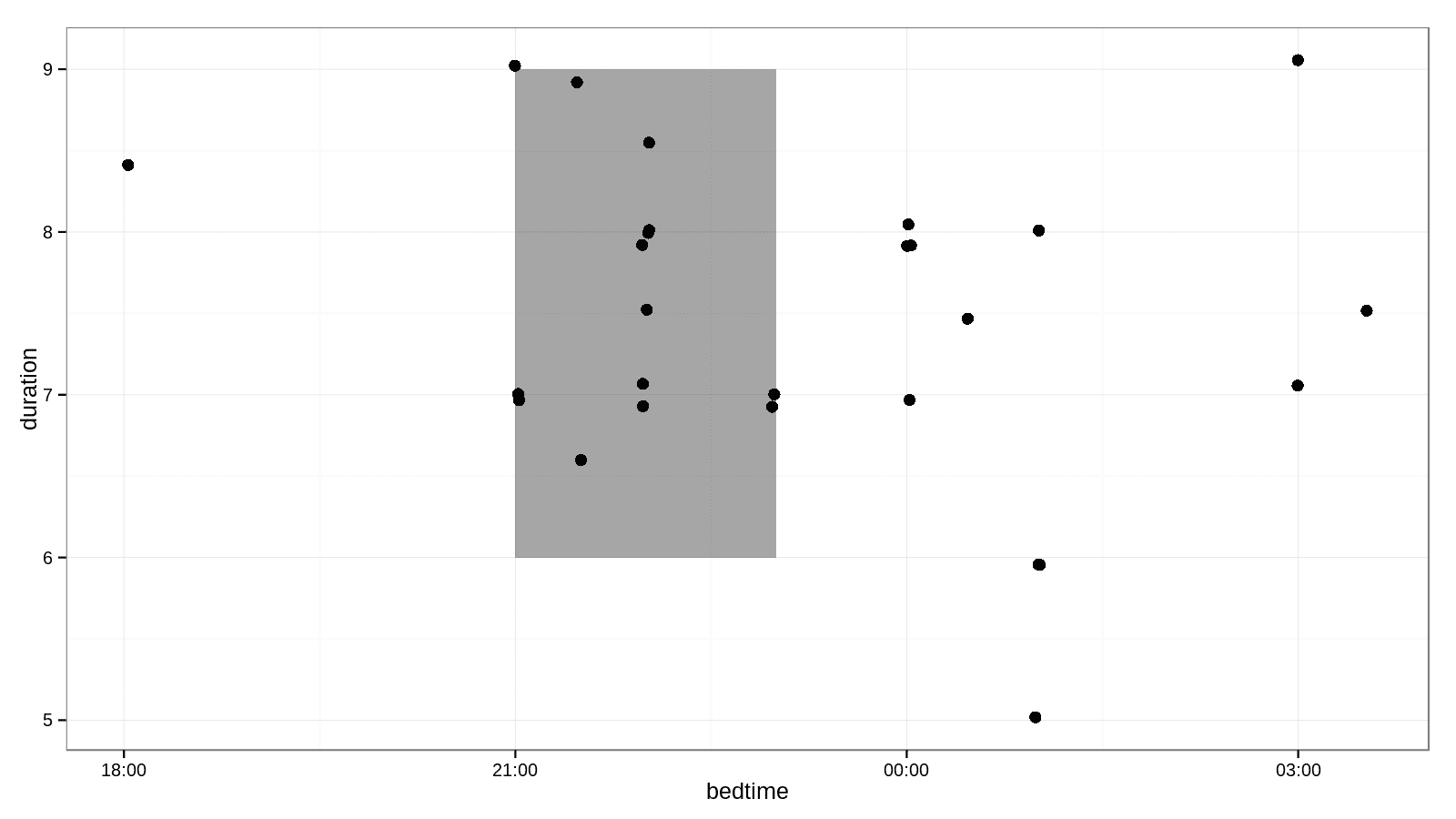 The darkened area captures those with a "normalish" bedtime (9-11p) and "normalish" duration (6-9 hrs). This was just one possible choice. One could highlight the entire width for durations of x-y hrs of sleep to show that regardless of bedtime, most of these individuals got a similar duration of sleep with only one at 5hrs/night. Or perhaps one could just highlight some portion of bedtimes, which might illustrate that 1/3 - 1/2 of the individuals actually were night owls to some extent.

So, there's my attempts at putzing around with other ways to look at this data set. There's probably better ways, but I certainly don't think the linear scale and scatter plot are any worse than the original, which I don't think actually communicates the data/point at all. It's not even that pretty to me due to the hodgepodge of colors, and I think the main thing it accomplishes is looking "interesting from a distance." This is the bummer with a lot of infographics -- they are better at being a sort of piece of artwork as long as you don't start trying to look very closely. Almost like a divergent Magic Eye poster. For it to work you sort of have to stare through it. If you start looking for information in the pixels, you're in for a headache.