Welcome to my attempt to contribute to the amazing FastLED library with some tutorials and explanations. The library is growing quickly, and I've seem some posts lately asking about more documentation/examples so I thought I'd take a stab at it. Honestly, I'm probaby the completely wrong person for the job, as I just started using it myself… but why not?! I've found that one of the best ways to learn something is to teach it.

I only have WS2812B LEDs and an Arduino, so anything I write will use them and I won't be any help on other platforms/strip types. If you have questions, I'd highly recommend joining the FastLED Users Google+ community. They're helpful, fun, and it's a great place to see peoples' projects and learn more.

Note: I really do mean I'm an extreme novice, so please comment if I got something wrong or you think my wording/explanations could be better.

To get started, you'll need an LED strip and a microcontroller of some sort. I'm using an Arduino Uno and a strip of WS2812B LEDS. I used some 12V 5050 RGB strips in a previous project and these same WS2812B strips for a more recent one. I vastly prefer the latter, as they only require 5V (no MOSFETs required) and one data line (vs. one per channel, so 3 for a 12V strip). Also, the WS2812Bs are individually addressable, so any pixel can be any color. While I'm sure there's people using FastLED for these, that seems like a fringe use for such a capable library.

In any case, here's my setup: 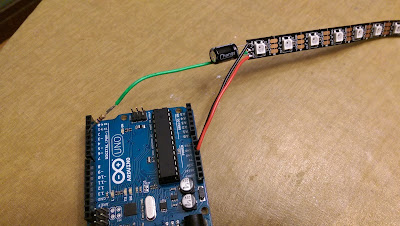 Pretty simple. I just soldered wires to the three connections on the LED strip (make sure you get the Din side!) and connected them to the Arduino. Per the Adafruit guide, I also soldered a 1000 uF capacitor between the 5V and GND pads (negative lead on the GND side) and have a resistor between pin 3 and the data wire (green in my setup). I haven't had any bad experiences not using this, but I'm trying to follow best practices here :)

That's it from the hardware side, at least for this demo. You can do all sorts of things like dimentional matrices, but we'll just stick to a strip for now. Moving on to code, might as well start by piggy-backing on FastLEDs own wiki.

To get going, I'd recommend using git to grab the v3.1 version of FastLED. It appears that this branch is going to receive the abundance of new features, and it already contains a lot of neat stuff not in the v2.x variants (maybe even 3.0?). If you're not familiar with git, it might be easiest to click "Download ZIP" from the FastLED 3.1 github page and extract it into your Arduino library folder (My Documents\Arduino\Libraries on Windows). I use Linux, so my process is to open a terminal and do:

Now you can create a new .ino file with your IDE of choice (I've really been loving Sublime Text) and insert the starter code from the FastLED wiki:

That code will initialize your FastLED object. You're defining how many pixels you have (let's call this n), what pin to send the data over, creating an array n long so you can store each led's color values in it, and then telling FastLED about said array for future control.

The heart of any Arduino sketch happens in the loop() function, which runs whatever you tell it over and over. The wiki already explains some basic functions, but let's go through them anyway. The first thing to understand is that your LED strip is treated as an array. Maybe you're more familiar with the term "vector" from another language, or can visualize a single row of cells in a spreadsheet. Your LEDs are treated like this (10 LED strip):


Each "slot" (also called an index) contains the values for that LED. There are 10 of them, but array numbering starts with 0, so things are always 1 "off." Since we initialized this array to store the values as leds[NUM_LEDS], this means you created an array with NUM_LEDS "slots" (28 in my case if you check the code above). If you've not worked with arrays before, it will really help to keep the above in mind as we play around with the library.

On that note, we can go to the first example! To set an RGB color on an LED, we need to set the data in it's slot in the array to the color we want. FastLED has a ton of pre-defined RGB colors to choose from, accessed by CRGB::color_name. We'll set the first LED to red like so:

If you run that… nothing happens! The above is simply storing a color value in the 0th slot of the leds array. From skipping ahead on the Wiki, we can see that each value in the leds array contains values for red, green, and blue:

So, our leds array is actually a multidimensional storage system for the color channels of each pixel. Can we test this? We can initialize a serial connection to the Arduino so we can print out values as we play around:

Run the sketch and start your serial monitor. You'll see these lines spitting out:

It works! We set the red value of leds[0] to 255 (100%, as each color can take a range of 0-255). Now, to send that data to the strip and show the result, you add FastLED.show() to the code. This takes the current values of leds (all NUM_LEDS slots of data) and sends it out to the strip. Since we didn't touch the other array values, only the first led will do anything. 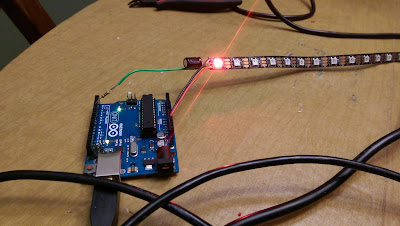 Well, that was fun… how do I stop that light from shining in my eyes? You need to set the value of leds[0] back to 0. Technically, we only changed leds[0].r, but the way shown in the wiki to turn off an LED is to set it to black:

The fun is all in the changing of pixels. You can set one on, and turn it off, so the natural next step is to do that again and again:

How about moving the pixel? You're familiar with the idea of an array, so what we want is something like this, shown as snapshots in time, with the * representing the pixel that's on:

How might you do that? To do this, we need to set the 0th pixel to some color, show it, then turn it off and set the 1st pixel to a color, turn it off, etc. Using the excellent wiki again:

If you're not familiar with loops, that might seem a bit confusing. A for() loop focuses on some variable specific to the loop (dot in this case), does something while it's in a certain range of values (less than the number of LEDs we have), and does something after each time it runs (dot++ means, "add one to the current value of dot each time).

Walking through the loop step by step we find:
The for() loop will stop as soon as the condition dot < NUM_LEDS is not met. In my case, this means as long as dot is less than 28, it will run. Arrays starting at 0 is handy in this case since the values are 0-27. Thus, once the loop runs for dot equal to 27, one will be added and the loop will exit.
Give it a try and hopefully you find that movement satisfying!

The dot keeps moving because once the for() loop is done, you're also inside of the main loop() function, so the for() loop just starts again. The variables in a for() loop are temporary, so they just get re-initialized each time as dot = 0. What if you wanted the dot to come back? Think through what you'd want to have happen, perhaps starting with the end of the loop we used above:
You could write the loop in "reverse," like this:

I find this a bit hokey since you have to tweak dot to odd values. You've defined some nice constants, and the array starts at the wonderful number, zero, but to go in reverse one has to fiddle. Can we use dot just as it is, increasing from zero -> 27? As you think about arrays, sometimes it can be helpful to lay out what your loop variable is compared to what value you want to change:

Can you see it? You can use math inside of the index brackets ([ ]) when setting values, so what if we wrote the return loop like this:

Pretty neat! I think I'll call it good for now, and hope to continue on writing about using FastLED in the near future.
Posted by jwhendy at 23:12